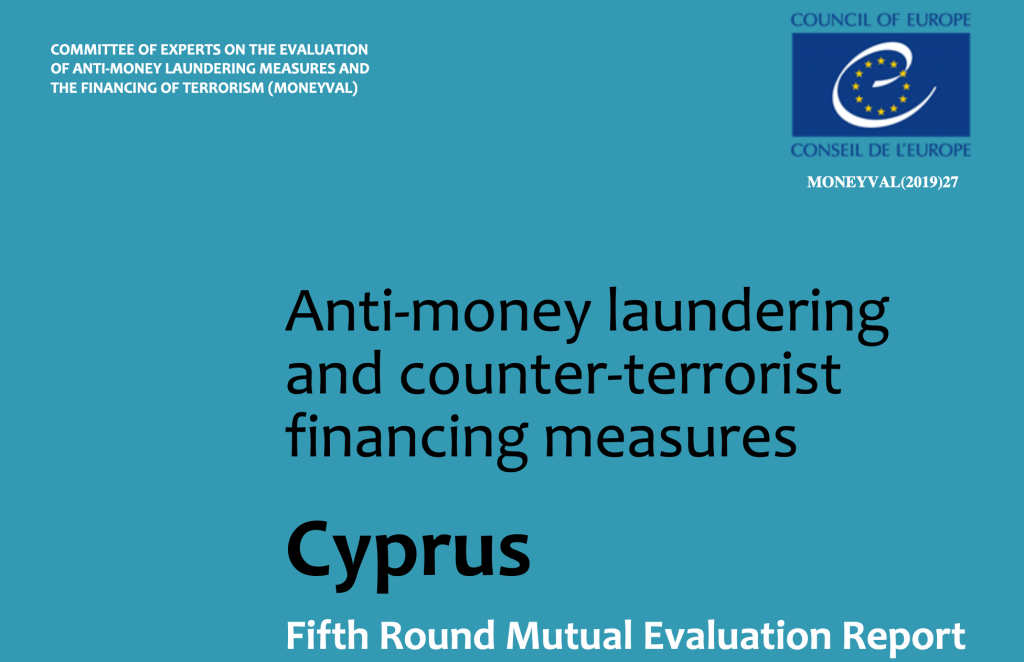 On 12 February 2020 the Committee of Experts on the Evaluation of Anti-Money Laundering Measures and the Financing of Terrorism (“MONEYVAL”) published its report on Cyprus (“the Report”). The aim of MONEYVAL is to ensure that its member states have in place effective systems to counter money laundering (“ML”) and terrorist financing (“TF”) and that they comply with the relevant international standards in this matter.  Cyprus previously underwent a MONEYVAL evaluation in 2011 and was placed on biennial follow up with those follow up visits taking place in 2013 and 2015.  This most recent report follows an on-site visit which spanned the period 13th to 24th May 2019.  It summarises the Anti-Money Laundering (“AML”) and Combatting the Financing of Terrorism (“CFT”) measures in place at that time and assesses the level of compliance with FATF 40 Recommendations.  It then assesses the effectiveness of the current measures and provides recommendations for improvement where these are felt necessary.

Cyprus is exposed to external ML risks owing to its position as an international financial centre (“IFC”).  This offers the potential for non-residents to seek to launder proceeds of crime by transferring them through the Cypriot banking system or via trust and company service providers (“ASPs”).  Cyprus is also exposed to TF risks as a result both of its position as an IFC and because of its geographical proximity to numerous conflict zones.

Overall, there is much in the report for Cyprus to be positive about.  The Central Bank of Cyprus (the “CBC”) and the Institute of Certified Public Accountants of Cyprus and the Financial Investigations Unit are all given significant praise.  There is generally a good understanding of the ML and TF risk although in the ASP sector, for example, the general understanding of the TF risk is less comprehensive.  Under the guidance of the CBC the banking sector has become effective at mitigating risk.  The competent authorities are said to work well together at both policy and operational levels.  Mechanisms (formal and informal) are in place to give constructive and timely assistance to other countries, such as asset freezing and notification of suspicious transactions, and, they have been used to good effect.  Indeed, Cyprus joins 25 out of 98 MONEYVAL members which have avoided a ‘non-compliant’ rating in one or more categories.

However, following the Report, there is little room for complacency since MONEYVAL identified some significant weaknesses which Cyprus must address as a priority.

Emphasis was placed on the fact that Cyprus tends to be reactive rather than proactive when pursuing money laundering from criminal proceeds generated outside of Cyprus.  It will ‘freeze’ funds if requested to by other governments but will not act on its own initiative.  Such funds are regarded as the major ML/TF risk for Cyprus and so a more aggressive attitude would be appropriate.

The ASP sector is regarded as particularly vulnerable and unduly reliant on the banking system acting as a ‘backstop’ to identify ‘suspicious’ transactions.  Given its position as a ‘gatekeeper’ for entry of funds into the Cyprus financial system this sector needs to be proactive in setting in place systems to identify and report suspicious transactions.  There was evidence that, in general, ASPs understood the concept of ML but did not demonstrate a universal understanding of the risks of evasion of financial sanctions in order to finance terrorism or the manufacture of weapons of mass destruction.  It was acknowledged that Cyprus has made significant progress in establishing a supervisory framework for ASPs but further progress is still necessary.

Cyprus was also criticised for its tardiness in conducting a formal assessment of risks posed by ‘legal’ persons.  This does not sit well with the fact that the country has an established company formation and administration industry. It is a barrier to transparency as regards the identification of beneficial owners of companies.

Unsurprisingly, given the widely reported scandal concerning the issue of Cypriot passports to several ‘undesirable’ Cambodian citizens, the Cyprus Investment Programme (“CIP”) also came under close scrutiny. The report recommended that a comprehensive ML/TF risk assessment of CIP should be conducted.  It also highlighted the fact that, due to the introduction of the CIP, the TF/ML risk in the real estate sector has magnified enormously.  This is because the quickest and easiest way to ‘invest’ under the scheme is to buy property. The sector does not appear to have fully grasped its new ‘exposed’ situation and has yet to take steps to mitigate the new risk level.  It is therefore recommended that supervision of the sector be greatly enhanced and steps taken to ensure that real estate agents comply with ML/TF preventative measures.

Also touched on in the Report were concerns relating to the proposed expansion of casino operations in Cyprus.  At the time of the monitoring visit an onsite visit was made to the existing casino which revealed weaknesses in existing ML/TF compliance.  Rapid expansion of casino operations is considered high risk particularly in view of the strategies that they intend to employ to attract high net worth individuals to Cyprus.   Expansion of operations was viewed as being unwise until AML/CTF compliance concerns have been properly addressed.  MONEYVAL did however, acknowledge that an independent review of compliance measures, initiated by the casino, was in process at the time of their visit. This was intended to result in an action plan to be implemented in order to successfully mitigate the ML/TF risks.  Reservations were expressed as to whether the plan would encompass the proposed expansion as well as the existing operation.

A final concern MONEYVAL raised was the need to address the ML/TF risks inherent in the ‘not for profit’ sector since it is possible for such entities to effectively provide cover for terrorist organisations. Development of a framework in this area is at a very early stage.

The MONEYVAL report was published on the same day that Cyprus received a legal warning from the European Commission for its failure to apply new AML laws adopted at EU level in 2018.  The laws are aimed at countering dirty money risks in a wide range of sectors, including cryptocurrency exchanges, prepaid cards and shell companies.  All EU states were required to enact the laws by January 2020 but to date Cyprus, Hungary, The Netherlands, Portugal, Romania, Slovakia, Slovenia and Spain have yet to comply.  The laws are primarily directed at combatting TF and, significantly, it is this aspect of risk mitigation rather than ML per se which MONEYVAL has highlighted as being weak in Cyprus.  Both the Report and the legal warning underscore the need of Cyprus to address the TF risk as a matter of urgency, particularly if it wishes to maintain and improve its reputation as a credible international finance centre. They also support the argument that Cyprus should look towards attracting reputable businesses and individuals in order to secure future growth rather than relying on ‘get rich quick’ schemes.   The fact that MONEYVAL rated Cyprus as ‘compliant’ or ‘largely compliant’ with 14 out of 16 of the ‘Core’ and ‘Key’ recommendations is a fact that the government and the competent authorities can be proud of.  They will, however, need to tackle the issues raised in the report in time to report back to, and to satisfy, MONEYVAL at its first plenary in 2021.

The full MONEYVAL report may be viewed here.