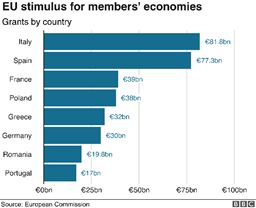 European Commission President, Ursula von der Leyen, today 27 May 2020, announced proposals for a EURO 750 bn relief package to help the European Union (‘EU’) tackle an unprecedented economic and health crisis caused by the Covid 19 pandemic.  The package consists of Euro 500bn in grant aid and EURO 250 bn in repayable loans.  The distribution of relief would be heavily weighted towards those countries within the EU which were already financially weak and which have suffered the most damage as a result of the pandemic.  Consequently, around EURO 80 bn in grant aid would be directed to both Italy and Spain. With other countries such as Romania receiving around EURO 20 bn.

The proposals require the approval of all EU Member States in order for them to be implemented, and their unanimous assent is far from guaranteed.  The proposals hinge on the European Commission (‘EC’) borrowing EURO 750bn on capital markets secured against the EU budget 2021-2027.  This is a significant political move, since it would be the first time that the Member States have attempted to raise finance as a single unit and several relatively robust Northern European states are likely to object to taking on debt for other countries.  Austria, the Netherlands, Denmark and Sweden (the ‘Frugal Four’), in particular, have already been vociferous in opposing the concept of taking on the pandemic related debts of the badly affected southern European countries.  They are also strongly opposed to providing any form of grant aid, preferring instead to offer low-interest loans.  German Chancellor, Mrs. Merkel would also, undoubtedly have preferred to look to the European Central Bank to ‘front’ a recovery fund.  However, this option was effectively taken off the table earlier in May when Germany’s top court ruled that the European Central Bank’s mass bond-buying to stabilize the eurozone partly violates the German constitution.

The good news for Spain and Italy, however, is that prior to today’s announcement, the European ‘big guns’ of France and Germany had already agreed that it was important to show the world that the EU ideal is alive and kicking, despite an embarrassingly shambolic initial display at the start of the Covid 19 pandemic.   Both Macron and Merkel are strong believers in the EU and on a mission to demonstrate that solidarity, common values and a unified objective are not to be dismissed lightly. It is no coincidence that, on  18 May 2020,  they rocked the EU political world by putting forward their own joint proposal for a EURO 500 bn recovery fund and announced that any money allocated from the fund to a ‘needy’ country should be in the form of grant aid and not debt.  Importantly both they, and many other Member States, have the political will to avoid the mistakes made post the 2008 financial crisis.  There is a real fear that the whole Eurozone could be destabilized if there is an uneven economic recovery following the pandemic.  Unfortunately, those countries already burdened by excessive debt following 2008 are also those which have been worst affected by the pandemic and the associated ‘lockdown’.  They lack the funds to provide the largescale emergency spending which tackling the effects of Covid 19 demands.  Compounding this problem is the fact that they are also countries which rely heavily on tourism to boost their GDP. Therefore, they will be unable to restart their economies as rapidly as their fellow Member States, with a more diversified economy, should be able to.   The EC will hope to persuade opponents of the proposals that the proposals are an exercise in common self-interest.

In a bid to win over the Frugal Four the EC is likely to impose conditions on countries which link the allocation of grants to expenditure on modernizing their economies via measures such as improving digitalization or, fulfilling Green Deal objectives such as developing clean technologies.  It is also proposing new revenue streams to help finance the debt repayment.  The most probable suggestions being made in this regard are likely to include a tax on plastics, some money from the CO2 emissions trading scheme, a digital services tax, national corporate taxes and an import levy on goods produced in countries with lower CO2 emissions standards than the EU.

President von der Leyen certainly has a tough task ahead of her to win over the Frugal Four.  She did, however, gain an unlikely ally, days before her announcement, when Wolfgang Schauble, a prominent German fiscal hawk during the 2010-15 Eurozone debt crisis, announced that non-refundable grants rather than any form of loans were necessary to counter an  “economic slump that we have not experienced in our lifetime”[1]  She might also draw their attention to the fact that following her announcement, the Euro Stoxx 50, a benchmark comprising many of Europe’s largest publicly traded companies, was up by 1.7 percent from its opening figure.