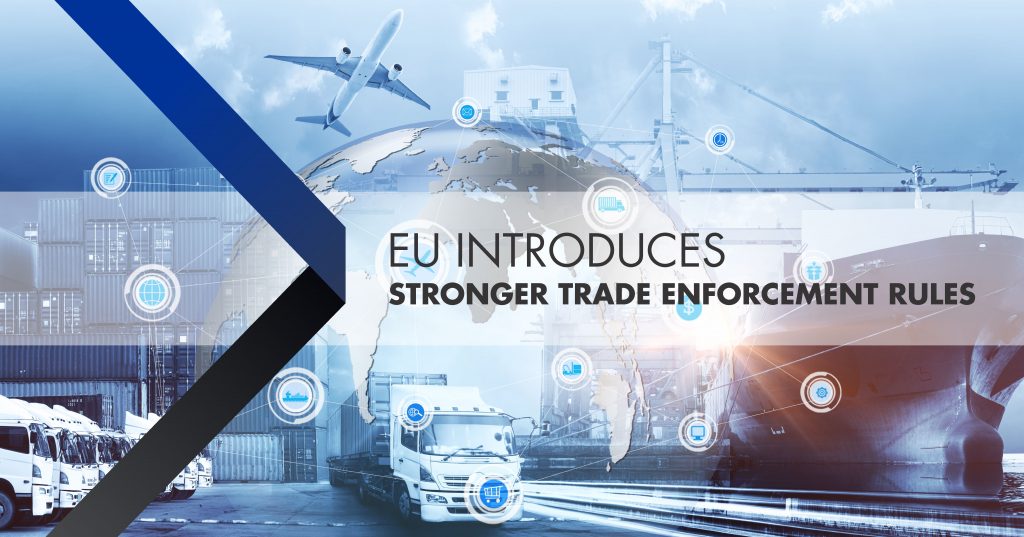 On 13 February 2021, the European Commission issued a press release announcing that robust new trade enforcement rules (the New Rules) have been put in place to protect the interests of the EU.  The drive to amend the existing Enforcement Regulation ( the Regulation) was a response to the effective sabotage of the operations of the World Trade Organisation (the WTO) by the USA under the administration of President Trump.

The Regulation required the EU to follow any trade dispute through all stages of the WTO system before taking any action against an offending business or nation.  Thus, if a favourable decision from a Dispute Panel was appealed by a member before the WTO Appellate Body, the EU was required to wait for the outcome of the appeal before taking any action against that member.  The Appellate Body requires a quorum of three judges.  During the period of his office President Trump expressed strong hostility to the WTO, and to the Appellate Body in particular; accusing the latter of political bias and of acting outside its authority. Under his leadership Washington was able to effectively freeze the activity of the Appellate Body by blocking new judge appointments for over two years. This meant that, when two of the Appellate Body’s three remaining members came to the end of their terms in December 2019, it became impossible to form a quorum and no appeals could be heard.  The EU, China and 15 other WTO members did, in 2020, agree to set up an alternative second tier dispute resolution system to try to deal with the Appellate Body impasse but many important WTO members remained outside of the arrangement.

The lack of a functioning WTO Appellate Body allows WTO members not signed up to the alternate system to avoid their obligations.  They can escape a binding ruling in favour of the EU (or any other member) by simply appealing a panel report, safe in the knowledge that the appeal will not be heard for the foreseeable future.

The New Rules allow the EU to act to defend its interests in a broader range of circumstances.  They introduce two crucial changes to the existing Regulation as outlined below:

Both leave the EU better equipped to promote compliance with, and enforce, EU trade agreements in the altered geopolitical context. Importantly the changes allow the EU to introduce countermeasures when it obtains a favourable ruling from a WTO dispute settlement panel, or in bilateral and regional agreements, when the other party attempts to frustrate adjudication of the dispute. By extending the scope of the Regulation the EU is plugging an important gap in its armour. Services and IP account for a large and growing proportion of world trade and are included in most international trade agreements. It is important that the EU can act to protect them from illegal competition.

When adopting the New Rules , the European Parliament (the Parliament) also insisted that an instrument was required to allow the EU to deter and counteract third countries trying to force policy choices on the EU in respect of trade.  In response to this, the European Commission has committed to presenting ‘anti-coercion’ legislation to Parliament by the end of 2021. The principal objective of this would be to counter “coercive” actions by the USA or China. Both countries have previously threatened the EU with trade restrictions, or tariffs, against European car manufacturers and other products.

Other measures that have been taken since the start of the current Commission which are directed at strengthening and targeting EU implementation and enforcement of trade agreements. Foremost among these are:

Since his January inauguration the early signs suggest that President Biden is looking to rebuild a relationship with the WTO.  Early in February his administration acted to end another WTO deadlock created by President Trump by expressing its “strong support” for Nigeria’s widely supported ex-finance minister, Ngozi Okonjo-Iweala, as nominee for head of the WTO.  President Trump had opposed her nomination, instead promoting a South Korean rival, Yoo Myung-hee.  MS. Yoo has now withdrawn her candidacy.  It is to be hoped that similar progress will be made in restoring the functionality of the Appellate Body.

The antics of the Trump administration have, however, exposed the vulnerability of the entire WTO dispute resolution system to the whims of the USA presidency. They underline the need for reform of the system to prevent similar ‘hostage’ situations occurring in the future.

The EU continues to support the multilateral system and WTO rules but, despite the positive moves made to date by President Biden, the reality is that the WTO trade dispute system is blocked.  Against that background, the EU must have the tools at its disposal to defend itself against unfair trading practices until a reformed and well-functioning multilateral trade rules and arbitration system is in place.  In the words of Executive Vice-President and Commissioner for Trade, Valdis Dombrovskis, “..we cannot afford to stand defenceless in the meantime. These measures will allow us to respond resolutely and assertively” (to unfair trading practices).[1]