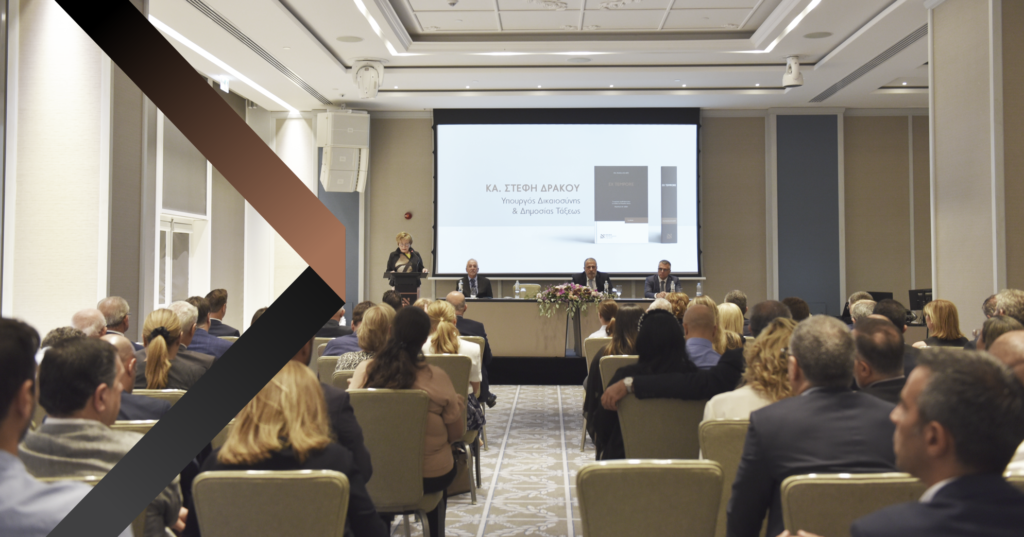 Blood donation a simple thing with a huge impact that most people can do.

Principal speaker at the event was Dr. Ioannis Delikostopoulos, Lawyer at Areios Pagos, the Supreme Civil and Criminal Court of Greece and Associate Professor at the Law School of the University of Athens. Supplementary speeches were delivered by the Attorney General of the Republic of Cyprus, Mr. George Savvides, the Minister of Justice and Public Order, Mrs. Stephi Drakou and by Mr. Christos Melides, Lawyer, representing Elias Neocleous & Co. LLC.

During his speech, Dr. Delikostopoulos, made reference to the extensive content of “Ex Tempore” which includes the most important and relevant pieces of legislation in all sectors of Cypriot law with jurisprudence by article.  He also emphasized, in a very unique way, the ease of its use before proceeding to praise Elias Neocleous & Co, LLC for altruistically expending significant human and financial resource on promulgating knowledge of Cypriot law.  The Attorney General and the Minister of Justice and Public Order, in their speeches, concurred with his opinion that “Ex Tempore” is an extremely useful and well-structured legal handbook, which reflects the expertise of its authors and offers the reader easy and immediate access to  legislative texts of the Republic of Cyprus. Gratifyingly, Mrs. Drakou also suggested that “Ex Tempore” should be used in legal offices and courts in Cyprus “to the maximum extent possible”.

Mr. Melides noted that, whilst Elias Neocleous & Co. LLC is closely associated with the promotion of modern technologies, it also appreciates the importance of the written word.  He proceeded to express the hope that the handbook would become a useful tool not only for lawyers but also for law students, administrative bodies and even for the public wishing to remain updated on legislative topics and issues.

Finally, Mr. Melides, the Attorney General, and Dr. Delikostopoulos, all paid tribute to the late Andreas Neocleous.  Andreas Neocleous was a respected and pioneering attorney who had the inspiration for the “Ex-Tempore” project.  He was the driving force behind it seeing it as a natural progression from his earlier ground breaking publication, “An Introduction to Cyprus Law”.

Media presentation of the event may be viewed.

For further information, you may contact Elias Neocleous & Co. LLC, at  25110110 or via email at [email protected].